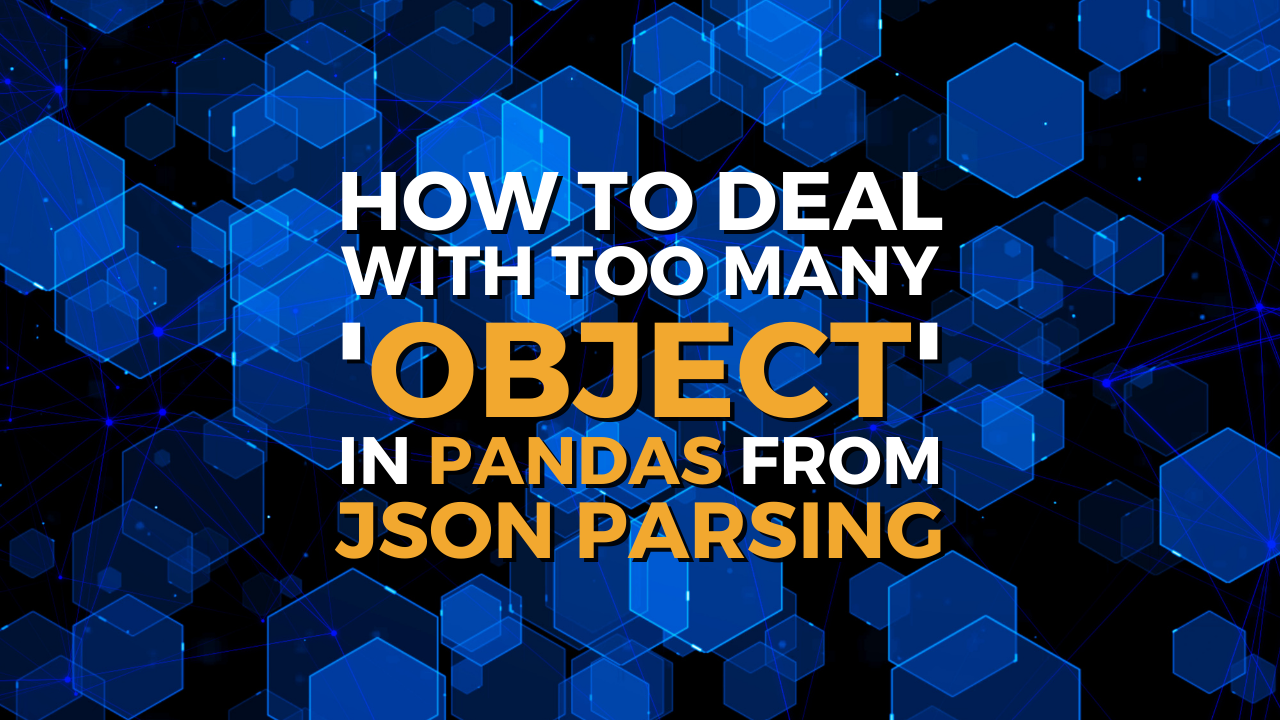 Here we are with a new “episode” about managing large JSON, as promised.

If you have not yet read the first two blog posts, I suggest making up for them in order to better understand what I’m going to discuss right now:

How to manage a large JSON file efficiently and quickly

From our experiment in the second blog post, we noticed that the more the dataset contains primitive types, the less impact the data parsing will have on time and memory. The more object dtype features we have, the more is the memory gap between the json files on disk and the python data frame.

Having to deal with a lot of categorical data is very expensive and we need to find the most efficient way to analyze them.

As usual, we contextualize the experiment in a real-world scenario: e-commerce.

We collect all the interactions that users have with the website products and save them in JSON logs. Then we have to read all these files with Python, manipulate them, and create the training and the test sets in order to train a Learning to Rank model.

The approach we propose here is to manage categorical data while collecting it and store it directly as numeric types in the JSON. That way, when parsing JSON files, we don’t have to worry about the object dtype features.

How could this be done?

It depends on what the categorical features look like. Here are 3 different cases:

1) When having multiple values for a single feature (array)

2) ‘exploding’ each array in N numerical columns (where N is the fixed-length dimension of the array):

userDevice may have 3 distinct values = desktop, mobile, and tablet

userID may have N distinct values, depending on how many users are registered on the website

A categorical feature is said to possess high cardinality when it has too many unique values. In this case, one-hot encoding is not considered a good approach since it leads to two problems: space consumption and the curse of dimensionality. Unless you decide to select only the first N categories that occur most for a particular column and apply one-hot encoding on them, you should analyze different solutions and techniques most suitable to your use case.

In our scenario, we have a total of 45 object-dtype features:

For the experiment, we have used the same dataset, in order to compare this approach with the previous one in terms of:

In the previous experiment, we had 77 columns/features including 45 object dtypes:

In this experiment, after the features transformation, we have 209 columns and just 2 object dtypes:

Again, the fact that many small files require less time but more RAM usage in parsing than a few large files remained ​unaffected!

Would it be better if we removed (or transformed) the 2 remaining object features?

Just for curiosity, we dropped the object features left from the dataset and repeated the experiment. Again, we obtained very good performance in terms of time and the memory usage of the data frame elements in Python, but not in the RAM consumption:

To this, it should also be added that in the approach proposed we transformed the object dtypes in a lot of float64 dtypes due to the presence of missing values in the features manipulated. Even float64 has a high memory impact compared to float16/32, or integer.
We were hoping for a smaller peak memory impact on the parsing and a reduced time at the cost of initial bigger JSON storage on disk.
Unfortunately, the additional overhead on disk and the additional number of features proved to be quite costly(in time and memory when parsing), dwarfing the benefit of having a smaller final data frame.

Contrary to what we expected, this approach did not come with great absolute benefits. Although transforming most of the ‘object’ dtype features brings a smaller data frame to work on, we need more space to store the data and consequently roughly the same time and memory of the previous experiment for parsing them as a whole.

Given that the storage is higher, the peak memory and time required for the parsing is higher, it seems better to just manipulate the data frame after the parsing to diminish its size.
This is the conclusion of this preliminary study.

Did I mention we do Learning To Rank training?
We also provide consulting on these topics, get in touch if you want to bring your search engine to the next level!

Did you like this post about How to Deal with Too Many ‘object’ in Pandas from JSON Parsing? Don’t forget to subscribe to our Newsletter to stay always updated on the Information Retrieval world!