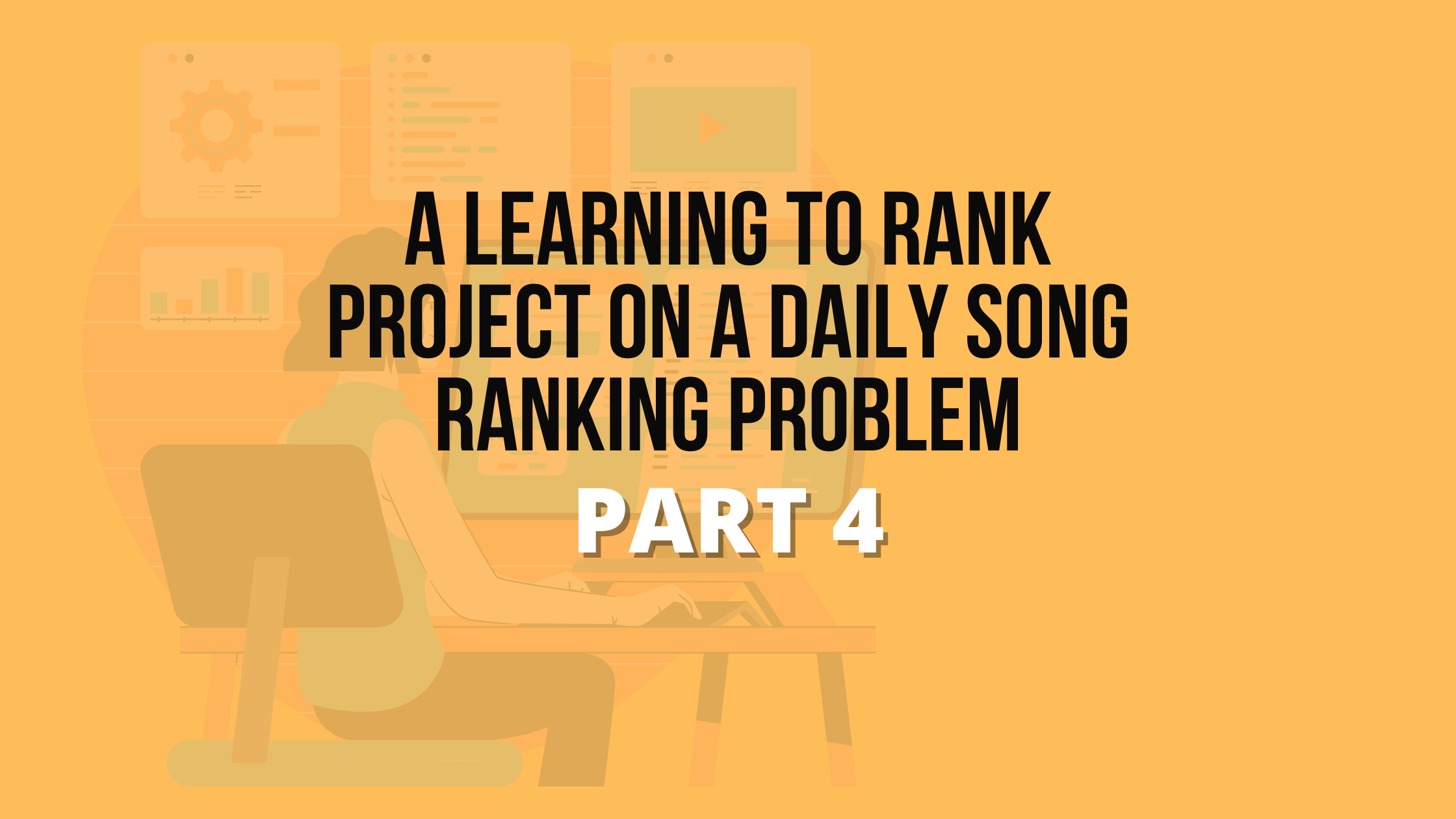 Did you really think it was over? Good news!
The Learning to Rank project on a Daily Song Ranking problem has the fourth episode. If you are interested in integrating Machine Learning with Search, with this blog post we will continue to explore Learning to Rank techniques on a top K Song retrieval by country and date problem.

As always, in order to have the overall picture, I suggest you take a look at the previous episodes, where you will learn:
Part 1 – how to set up and build a Learning to Rank (LTR) system starting from available data and using open source libraries
Part 2 – how to explain the behaviors of the models through the use of the powerful library called SHAP
Part 3 – how to create the query ID and be careful when splitting the training and test sets

In this blog post, I will try to answer the following questions:

QUESTION 1) REMOVE THE QUERY-LEVEL FEATURES AFTER USING THEM TO CREATE THE QUERY ID: YES OR NO?

In our project, the query-level features are Region, Day, Month, and Weekday. We used them to create the query Id hashing (query_ID), as shown in these tables:

We can see that there isn’t a big difference, but keeping the query-level features seems to get higher performance results.

For a better comparison, we tested them on the same test sets; to do this, the features must be the same in terms of number and name in both training and test sets otherwise we get this error message: ‘ValueError: feature_names mismatch‘.

So in this case, instead of removing the query-level features, we kept and filled them with nan values; here an example:

Only then the model can be trained. The results obtained are as follows (Table 2):

Removing the query-level features (DROP – Table 1) or filling them with ‘nan’ values makes absolutely no difference. We can see from the table above that whether or not we use them in the test set, they are not considered at all; in fact, the result always remains the same.

On the other hand, we can notice that if we keep the query-level features at training time but we do not test them, the eval-ndcg@10 is negatively affected in some way and that confirms their usefulness (Table 3):

One reason might be that keeping query-level features gives the model the ability to adjust the weight of the other features, influencing the forest of tree building.

It is extremely important to assess the distribution of training samples per query Id, since we may end up with results that are not truthful. Few observations do not give us sufficient confidence in the documents’ relevance. Also, two common mistakes to avoid are:
– If we have a limited number of observations, during the split it might happen that we get some queries with only one training sample. In this case, the NDCG@K for the query group will be 1, independently of the model;
– During the split, we could put all the samples with a single relevance label in the test set.

That’s why it is a good recommendation to drop the under-sampled queries. However, as already said, this concept must be contextualized. In case we have reliable data and we are confident that we have properly managed the conditions (described above) that can potentially skyrocket the NDCG, we could try to keep those observations.

In fact, this is what we did in the previous implementations; we set a threshold and for the query Ids that had a number of observations under that threshold, we saved those observations in a new data frame called under_sampled_only_train. This is because we kept these observations in the training set and moved some of them to the test set (the query Ids with the highest number of observations) only if the test set appeared less than 20% of the entire dataset. Why this approach? In most situations, training a model using more data (since we have it!) is usually better; however, with this experiment, we investigated and deepened to understand if this really brought advantages or not.

Indeed, we wondered: what happens if we completely remove the ‘under_sampled_only_train‘ observations instead of keeping them in the training set?

We checked the differences between training a model by keeping the under-sampled query Ids (KEEP) and by removing them (DROP), then we tested these models on the same test set (which does not contain under-sampled queries at all!). Both models have the same features (query-level features included) so they can be compared; the only thing that changes is the number of total observations, so the number of query Ids. The results have been summarized below (Table 4):

We can notice there isn’t a big difference; in our case keeping the under-sampled queries in the training set seems to get equal or slightly better results, so we may be quite sure that we have reliable data and the performances are truthful.

It should also be said that these results are influenced by the threshold set; raising or lowering the threshold, you can decide to include more or fewer observations in the under_sampled_only_train data frame and potentially obtain different performances.
The threshold should be set according to the distribution of your data – try different values to see what happens!

Let’s see the results of another experiment.

As described so far, in our dataset there are 4 query-level features (Region, Day, Month, and Weekday) that were used to create the query Id hashing. The under-sampled queries are stored in a data frame called under_sampled_only_train and will only be present in the training set; this data frame contains 252423 observations and 3333 different query Ids.
To make these query Id groups more “populous”, what happens if we assign a less detailed query Id to these observations only?

We tried two different approaches, “loosening the grain” of the query Id of the under-sampled queries each time more:

How did we group and assign the new “query_ID” to the under-sampled queries?

1. query_ID based on Region and Month

2. query_ID based on Region only

N.B. in order to avoid duplicates and/or errors, the new query Id values were not randomly assigned to groups but we used the following method:

We have obtained the unique ‘Region’ values and the unique ‘query_ID’ values from the under_sampled_only_train data frame in two lists and then assigned the first 16 unique query Id values as the new ‘query_ID’ to each specific ‘Region’ group.

This choice was made to group rows that still have a part of the user’s request in common (i.e. Region OR Region and Month), creating groups with a more generic query and more observations than before.

The first and fourth “scenarios” are the same as described in Question 2, while the second and the third are the results obtained after grouping the under-sampled queries in the training set.
The results are more or less the same but it seems that keeping or dropping the under-sampled queries is better than grouping them in a less fine-grained query Id.
However, if we decide to group those observations to make the query Id’s list more “populated”, it is better to use as many query-level features as possible, which could lead to small improvements.

Did I mention we do Learning To Rank and Search Relevance training?
We also provide consulting on these topics, get in touch if you want to bring your search engine to the next level!

Did you like this post about A Learning to Rank Project on a Daily Song Ranking Problem? Don’t forget to subscribe to our Newsletter to stay always updated from the Information Retrieval world!