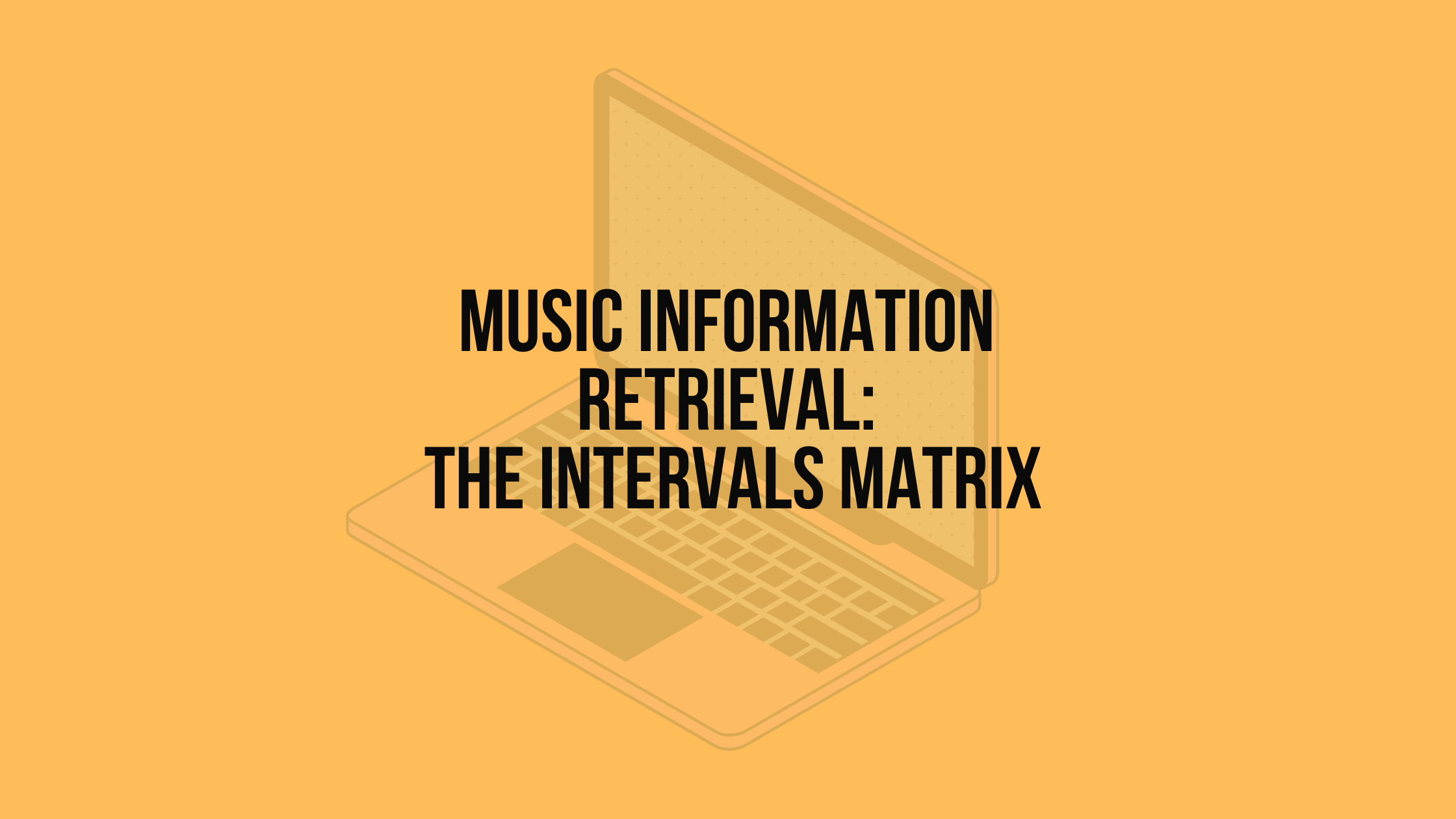 In this post we move a step up from the Intervals Table and we describe what we call the Interval Matrix.

The Intervals Matrix has been described in our London Information Retrieval meetup, in October 2019 (here the slides): it is an intermediate data structure used in the Cover Song Detection approach we are investigating in.

We already described in a previous post what an interval is and its central role in our approach; however, it’s worth to briefly repeat: it allows to think in terms of “relativeness” without caring about absolute frequencies or pitches.

Brief recap: what is an Interval?

The music theory defines an interval as the difference in pitch between two sounds.

An interval can be horizontal (or linear or melodic), if it represents the distance between two successively sounding tones, and vertical or harmonic if it pertains to simultaneously sounding tones, such as in a chord.

In Western music, an interval represent the distance between two notes of a diatonic scale. The smallest of these intervals is a semitone.

The diatonic scale is a musical scale that has

The Intervals Table is a matrix which defines the possible intervals between each note of the chromatic scale:

Although in Music Theory each interval is denoted using a name (e.g. 0 semitones => unison) the table above uses the number of semitones as a measure for indicating the distance.

Using the Intervals Table above we can say that:

Before introducing the central concept of this post, it’s definitely better to start from the input, the chroma features / chroma matrix, and then see the manipulation needed for getting an intervals matrix.

The chroma features is a representation, along an interval composed by subsequent instants {t0 – tn}, where for each instant the audio signal is decomposed using the energy associated to 12 classes representing the 12 distinct semitones (or chroma) of the musical octave used in Western music notation. Here’s a sample matrix:

where you can see 12 * t (t=6 in this case, t6 is partially hidden) matrix where each vector represents the twelve pitches strengths for a given instant t.

The following is another example: the bass riff of “Zombie”, by Cranberries. On the upper staff you can see the symbolic notation of the riff, and then below there’s the corresponding chromagram; the coloured boxes highlight the compounding parts of the riff across the two different representations.

From Chroma Matrix to Intervals Matrix

For each Chroma Vector we keep the top k most intense pitch energies and we replace them with their corresponding ordinal position:

We will end up having a matrix of integers the with the same columns of the original matrix but only k rows. Each vector contains a ranked list of the k stronger pitch classes, sorted in descending order. Note the underlying assumption is that in order to represent and summarise a chroma vector, the stronger a class energy is, the better.

Almost done: the Interval Matrix is obtained applying the Intervals Table as a function between cells (ranks) having the same index and belonging to subsequent chroma vectors.

In this way we compute a distance between adjacent vectors (x[n] – x[n-1]) and those measures compose an output matrix that has:

As usual, let’s first define the behaviour we want to achieve:

We are going to use the same BDD approach for expressing those requirements as code (full code is available here):

And finally, the IntervalsMatrix is also available as a gist. As you can read, it is a basic wrapper around a matrix of integers. The constructor takes a chroma matrix and creates the internal data structure which captures the ranked intervals.

Great! Our test suite is growing:

to be continued in the next episode…