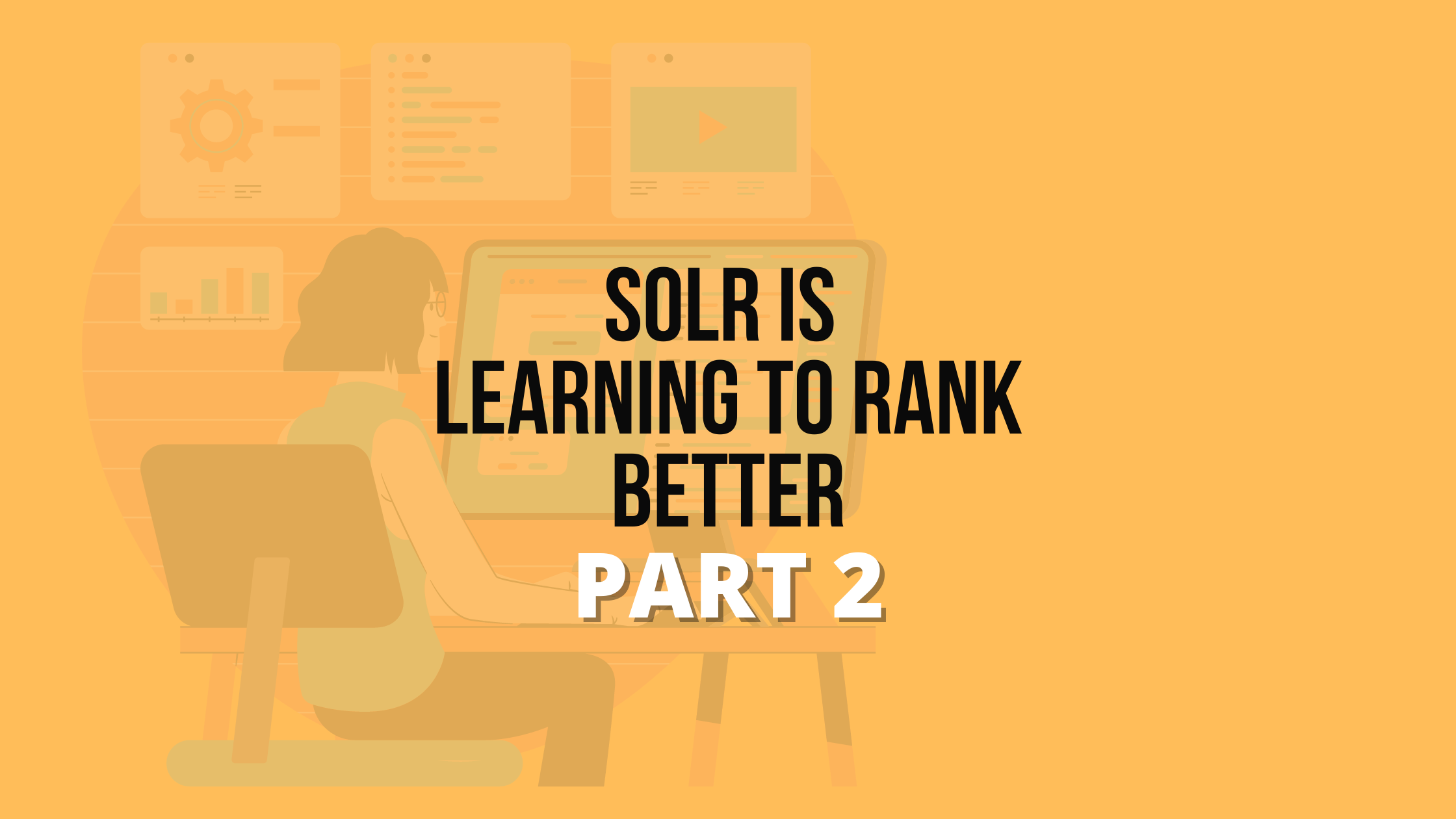 Ranking SVM is a linear model based on Support Vector Machines.
The Ranking SVM algorithm is a pair-wise ranking method that adaptively sorts results based on how ‘relevant’  they are for a specific query ( we saw example of relevancy rating for the pair document-query in Part 1). The Ranking SVM function maps each search query to the features of each sample. This mapping function projects each data pair onto a feature space.
Each sample ( query-document ) of the training data will be used for the Ranking SVM algorithm to refine the mapping. Generally, Ranking SVM includes three steps at training time:
Given the list of the features that describe our problem, an SVM model will assign a numerical weight to each of them, the resulting function will assign a score to a document given in input the feature vector that describes it.
Let’s see an example SVM Model in the Json format expected by the Solr plugin :
e.g.
} }
Given 3 example features : userTextTitleMatch – (query dependant feature) – (binary) originalScore –  (query dependant feature) – (ordinal) isBook – (document dependant feature) – (binary) The ranking SVM model in the example builds a linear function of the variables assigning a different weight to each of them. Given the documents (expressed with their feature vector): D1 [1.0, 100, 1] D2 [0.0, 80, 1] Applying the model we get the scores : Score(D1) = 1.0 * userTextTitleMatch(1.0) + 0.5 * originalScore(100) + 0.1 * isBook(1.0) = 51.1 Score(D2) = 1.0 * userTextTitleMatch(0.0) + 0.5 * originalScore(80) + 0.1 * isBook(1.0) = 40.1 The D1 documents is more relevant according the model. Key points : Here you can find some good Open Source libraries to train SVM models [2].

LambdaMART is a tree ensemble based model. Each tree of the ensemble is a weighted regression tree and the final predicted score is the weighted sum of the prediction of each regression tree. A regression tree is a decision tree that takes in input a feature vector and returns a scalar numerical value in output. At a high level, LambdaMART is an algorithm that uses gradient boosting to directly optimize Learning to Rank specific cost functions such as NDCG. To understand LambdaMART let’s explore the main two aspects: Lambda and MART.
MART LambdaMART is a specific instance of Gradient Boosted Regression Trees, also referred to as Multiple Additive Regression Trees (MART). Gradient Boosting is a technique for forming a model that is a weighted combination of an ensemble of “weak learners”. In our case, each “weak learner” is a decision tree. Lambda At each training point we need to provide a gradient that will allow us to minimize the cost function ( whatever we selected, NDCG for example). To solve the problem LambdaMART uses an idea coming from lambdaRank: at each certain point we calculate a value that acts as the gradient we require, this component will effectively modify the ranking, pushing up or down groups of documents and affecting effectively the rules for the leaf values, which cover the point used to calculate lambda. For additional details these resources has been useful [3] ,[4] . LambdaMART is currently considered one of the most effective model and it has been proved by a number of winning contests.
Let’s see how a lambdaMART model looks like :
This example model is composed by two trees, each branch split evaluates a conditional expression on a feature value, if the feature value is  : <=  threshold we visit the left branch >  threshold we visit the right branch
Reaching the leaf of a tree will produce a score, this will be weighted according to the tree weight and then summed to the other scores produced ( the model is an ensemble of trees). Given the documents : D1 [1, 9] D2 [0, 10] Applying the model we get the scores : Score(D1) = 1* (userTextTitleMatch (1) > 0.5 go right , originalScore (9) < 10 = 50) + 2 * -10 = 30
Score(D2) = 1 *(userTextTitleMatch(0) <= 0.5 = -100) + 2 * -10 = -120
The D1 document is more relevant according the model. Key points :
There are good open source libraries to train LambdaMART models, the one that we are going to use in this case of study is RankLib [5]

Important phase of the journey is to validate the model :
How good is our model in re-ranking our dataset ?
How good is the model in re-ranking unknown data  ?
It is really important to carefully select the evaluation metric that best suites your algorithm and your needs.
Evaluating the model will be vital for the validation phase during the training, for testing the model against new data and to consistently being able to assess the predicting quality of the model trained.
N.B. this is particularly important: having a good understanding of the evaluation metric for the algorithm selected, can help a lot in tuning,  improving the model and finding anomalies in the training data.

Normalised Discounted Cumulative Gain @k is a natural fit when choosing lambdaMART. This metric evaluates the performance of a ranking model, it varies from 0.0 to 1.0, with 1.0 representing the ideal ranking model. It takes K as parameter : K : maximum number of documents that will be returned . K specifies, for each query,  after the re-ranking, the top K results to evaluate. N.B. set K to be the number of top documents you want to optimise. Generally it is the number of documents you show in the first page of results. Given in input the test set, this is grouped by queryId and for each query the ideal ranking (obtained sorting the documents by descendant relevancy) is compared with the ranking generated by the ranking model. An average for all the queryIds is calculated. Detailed explanation can be found in Wikipedia [6]. Knowing how it works, 2 factors sound immediately important when reasoning about NDCG : 1) distribution of relevancy scores in the test set, per queryId 2) number of samples per queryId
War Story 1 : too many highly relevant samples -> high NDCG Given the test set A : 5 qid:1 1:1 … 5 qid:1 1:1 … 4 qid:1 1:1 … 5 qid:2 1:1 … 4 qid:2 1:1 … 4 qid:2 1:1 … Even if the ranking model does not a good job, the high distribution of relevant samples increase the probability of hitting high score in the metric.
War Story 2 : small RankLists -> high NDCG Having few samples (<K) per queryId means that we will not evaluate the performance of our ranking model with accuracy.
In the edge case of 1 sample per queryId, our NDCG@10 will be perfect, but actually this reflect simply a really poor training/test set. N.B. be careful on how you generate your queryId as you can end up in this edge case and have a wrong perception of the quality of your ranking model.

Focus of this section will be how to train a LambdaMART model using RankLib[5],
Let’s see an example and analyse all the parameters:
java  -jar RankLib-2.7.jar
–train /var/trainingSets/trainingSet_2016-07-20.txt
-feature /var/ltr/trainingSets/trainingSet_2016-07-20_features.txt
-ranker 6
-leaf 75
–mls 5000
-metric2t NDCG@20
–kcv 5
-tvs 0.8
-kcvmd /var/models
-kcvmn model-name.xml
-sparse
Tuning the model training parameters is not an easy task. Apart the general suggestions, trial & error with a careful comparison of the evaluation metric score is the path to go. Comparing different models on a common Test Set can help when we have produced a number of models with different tuning configuration.

We finally produced a model which is performing quite well on our Test set.
Cool, it’s the time to push it to Solr and see the magic in action.
But before we can do that, we need to convert the model generated by the Machine Learning libraries into the Json format Solr expects ( you remember the section about the models supported ? )
Taking as example a LambdaMART model, Ranklib will produce an xml model.
So you will need to parse it and convert it to the Json format.
Would be interesting to implement directly in RankLib the possibility of selecting in output the Json format expected by Solr.
Any contribution is welcome [7]!
In the next part we’ll see how to visualise and understand better the model generated.
This activity can be vital to debug the model, see the most popular features, find out some anomaly in the training set and actually assess the validity of the model itself.
[1] Solr LTR Bloomberg plugin
[2] LibLinear , LibSVM
[3] Visualising LambdaMART
[4] LambdaMART in Microsoft Research
[5] RankLib [6] NDCG [7] RankLib Extension for Json Models
// STAY ALWAYS UP TO DATE

Did you like this post about Model Training for Apache Solr Learning to Rank ? Don’t forget to subscribe to our Newsletter to stay always updated from the Information Retrieval world!